My book, Land Bargains and Chinese Capitalism: The Politics of Property Rights Under Reform, was published by Cambridge University Press in 2015.
Land reforms have been critical to the development of Chinese capitalism over the last several decades, yet land in China remains publicly owned. The book explores the political logic of reforms to land ownership and control, accounting for how land development and real estate have become synonymous with economic growth and prosperity in China. Drawing on extensive fieldwork and archival research, the book tracks land reforms and urban development at the national level and in three cities (Dalian, Harbin, and Changchun) in a single Chinese region (the Northeast, or dongbei). I find that the initial liberalization of land was reversed after China's first contemporary real estate bubble in the early 1990s and that property rights arrangements at the local level varied widely according to different local strategies for economic prosperity and political stability. In particular, the author links fiscal relations and economic bases to property rights regimes, finding that more "open" cities are subject to greater state control over land.
You can find reviews of the book in Perspectives on Politics, the China Quarterly, and the China Journal.
I was fortunate to discuss my book with Jeremy Wallace at the Chinalab Podcast. 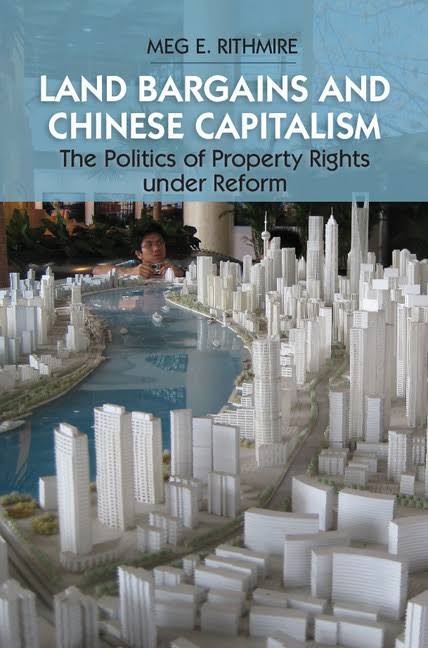 Chen, Hao, and Meg Rithmire. "The Rise of the Investor State: State Capital in the Chinese Economy." Studies in Comparative and International Development. (September 2020).

*Kristen Looney and I wrote this essay to be an accessible and comprehensive piece for scholars and non-scholars alike on the institutions that structure Chinese capitalism, including those governing land, capital, and labor.

Rithmire, Meg. "Will Urbanization Save the Chinese Economy or Destroy it?" Chap. 16 in The China Questions: Critical Insights into a Rising Power, edited by Jennifer Rudolph and Michael Szonyi. Cambridge, MA: Harvard University Press, 2018.

A new project looks at state-business relations in authoritarian Asia, examining contemporary China under the Chinese Communist Party, Malaysia under the United Malay National Organization, and Indonesia under Suharto’s New Order. A book, tentatively titled Unfaithful Friends: Business and Political Elites in Authoritarian Asia, is the centerpiece of this research agenda. The book aims to answer a series of theoretical questions about the delicate relationship between capitalists and autocrats. What strategies do authoritarian political elites adopt to manage the business class? What kinds of strategies succeed, for example by securing political stability and economic growth, and what kinds fail, either by stymieing economic growth or by generating regime instability?

The book draws on archival research, interviews, and several original datasets to first elaborate two ideal typical models of state-business relations under authoritarianism, and, second, explain why relations appear closer to one pattern or another. The two ideal typical models are mutual alignment, whereby an authoritarian regime organizes its institutions and/ or informal practices to serve the productive interests of business, i.e. to induce capitalists to invest in growth and development, and mutual endangerment, whereby economic elites and political elites are mutually entwined in corrupt dealings and invested in perpetuating each other’s dominance primarily because the loss of power on one side would bring about the demise of the other. Both forms of state-business relations would be described as “cooptation,” but, I argue, they produce vastly different outcomes with regard to both economic growth and political stability. I explain the development of one model over another by looking to the legitimacy of the capitalist class and the regime’s control over financial resources.

I have presented some of the material from the book in various fora.

At the Harvard Asia Center in fall 2018, and you can listen here.

At the Stanford Center for Democracy, Development, and the Rule of Law in fall 2020, here.

Abstract: The "state capitalism" model, in which the state retains a dominant role as owner or investor-shareholder amidst the presence of markets and private firms, has received increasing attention, with China cited as the main exemplar. Yet as models evolve, so has China's "state capitalism." We argue that a resurgent party-state, motivated by a logic of political survival, has generated political-economic dynamics that better resemble "party-state capitalism" than familiar conceptualizations of state capitalism. We demonstrate this by examining three prominent manifestations of China's unique model: party-state encroachment on markets; a blending of functions and interests of state and private ownership; and politicized interactions with foreign capital. Nevertheless, there remain deficits in the party-state's hold over capital, some of which themselves result from Beijing's logic of control. By probing the comparative and historical context of this evolution of China's model, we suggest directions for further inquiry on the consequences of party-state capitalism.

Abstract: A large literature on state-business relations in China has examined the political role of capitalists and collusion between the state and the private sector. This paper contributes to that literature, and our understanding of the internal differentiation among China’s business elites, by documenting the emergence of a particular kind of large, non-state business group that we argue is more akin to a mafia system than any standard definition of a firm. Drawing on large-N descriptive data as well as deep ethnographic and documentary research, we argue that mafia-like business systems share organizational principles (plunder and obfuscation) and means of growth and survival (relations of mutual endangerment and manipulation of the financial system). Understanding the particular moral economy that underlies mafia-like business systems and their interactions with the state challenges methodological foundations of research on China’s political economy and helps explain recent conflict between high-profile business people and the state.

Going Out or Opting Out? Capital, Political Vulnerability, and the State in China's Outward Investment

How do state-business relations interact with outward investment in authoritarian regimes? This paper examines this question in the context of China’s rapid transformation into major capital exporter. While most political economy scholarship focuses on firms’ economic profiles to discern preferences toward international openness, this paper shows the importance of domestic political status and specifically business’s vulnerability to the state in explaining the behavior of firms as they invest abroad and the state’s reaction. I present three types of domestic capital that differ in economic and political logic as they go abroad: tactical capital pursues political power and prestige, competitive capital pursues commercial goals, and crony capital seeks refuge from the state and asset expatriation. The Chinese regime’s approach to outward investment, which I characterize as mobilization campaigns adjusted over time and combined with targeted domestic regulation, endeavors to treat these different kinds of capital differently, deploying and disciplining tactical capital, enabling competitive capital, and constraining crony capital.